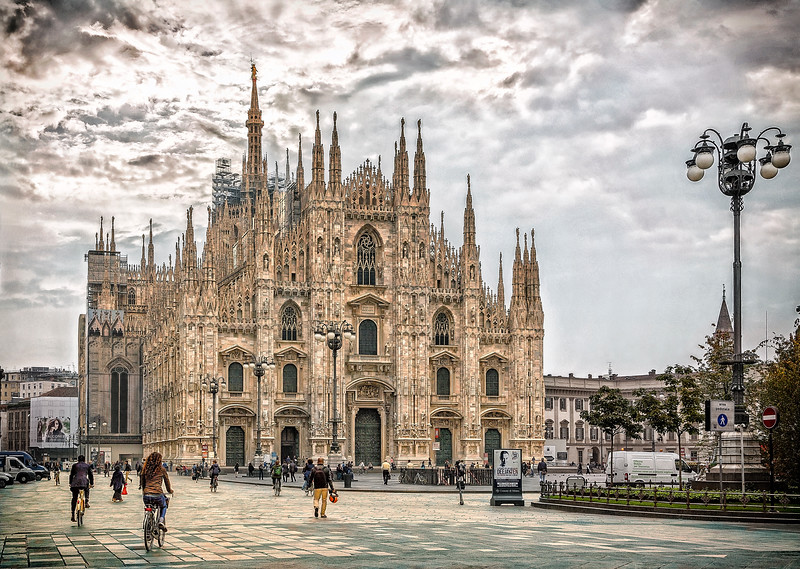 A Duomo for the Ages

Mark Twain, in his literary work, "Innocents Abroad," wrote the following regarding the Duomo in Milan.
"What a wonder it is! So grand, so solemn, so vast! And yet so delicate, so airy, so graceful! A very world of solid weight, and yet it seems ...a delusion of frostwork that might vanish with a breath!...The central one of its five great doors is bordered with a bas-relief of birds and fruits and beasts and insects, which have been so ingenious[ly] carved out of the marble that they seem like living creatures-- and the figures are so numerous and the design so complex, that one might study it a week without exhausting its interest...everywhere that a niche or a perch can be found about the enormous building, from summit to base, there is a marble statue, and every statue is a study in itself...Away above, on the lofty roof, rank on rank of carved and fretted spires spring high in the air, and through their rich tracery one sees the sky beyond. ...(Up on) the roof...springing from its broad marble flagstones, were the long files of spires, looking very tall close at hand, but diminishing in the distance...We could see, now, that the statue on the top of each was the size of a large man, though they all looked like dolls from the street... They say that the Cathedral of Milan is second only to St. Peter's at Rome. I cannot understand how it can be second to anything made by human hands."